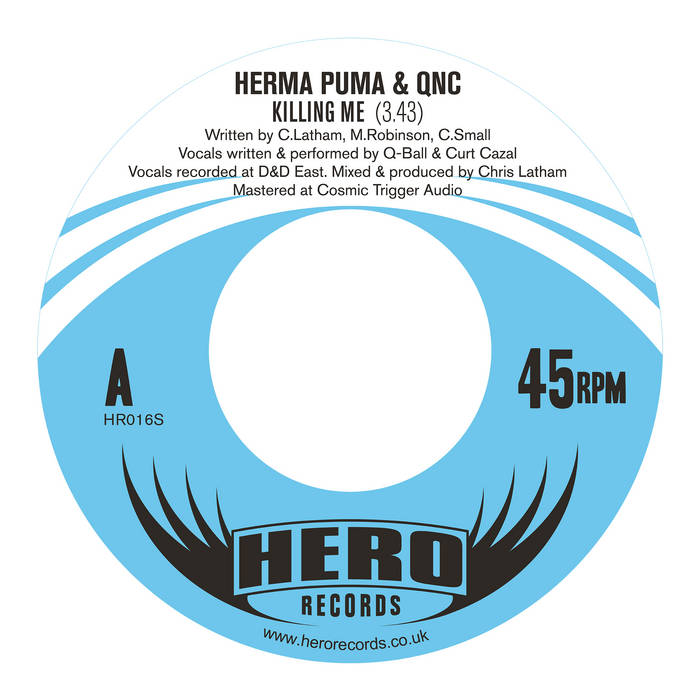 Herma Puma makes his Hero Records debut with 2 tracks featuring legendary New York MCs QNC (aka Q-Ball and Curt Cazal). With the funky 'Killing Me' and the grimy head-cracking breaks of 'I Did It (For Hip Hop)' this double-sider is a welcome return to classic beats and rhymes. QNC proudly proclaim they did it for hip hop and hip hop is all the better for it!

Beat creater and DJ Herma Puma aka Pimpernel Jones makes head nodding hip hop inspired by obscure jazz, library and funk records. Previous releases include the album 'Synchromystic' and 7” single 'Disposable Rappers' on First Word as well as tracks and remixes on labels such as Wah Wah 45s, Wass, Tea Sea and My First Moth. Herma Puma's collaboration with Renegades of Jazz 'Shake Me' b/w 'not Tonight' by The Monades is out soon on limited 7” vinyl on Hero Records [cat.no. HR015S].

QNC should need no introduction but if you have been hiding under a rock for the last 25 years then they have released a bagful of singles on seminal labels such as Gee Street , D&D and Chopped Herring as well as the album “Dynamic Duo” on Grand Central and have been featured on releases by the likes of Aim and Rae & Christian as well as the two collabrations with Frameworks on Hero Records – 'Ain't No Use' [HR007S] and 'I Need Your Love' [HR014S]. Oh, and not forgetting Curt Cazal's former group, the phenomenal and highly influential, JVC FORCE of 'Strong Island' fame,
Fresh & funky for 2015. Support the artists and buy new music!