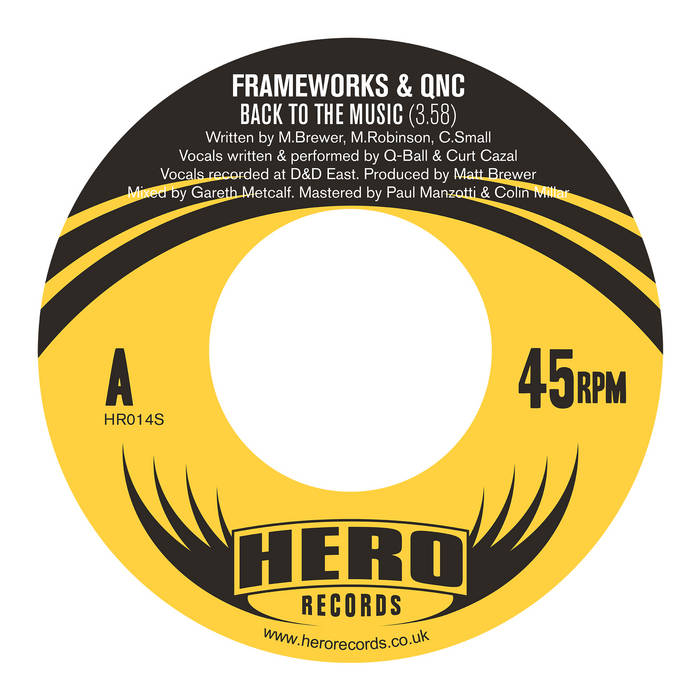 After the success of their first single on Hero Records, 'Ain't No Use' , Manchester producer Frameworks (aka Matt Brewer) and legendary New York MCs QNC (aka Q-Ball and Curt Cazal) return with the brand new soul-tinged head-nooder, 'Back To The Music'. Backed with the funk-fuelled Renegades of Jazz remix of their, ahem, classic tune 'Classic' this double-sider updates old school hip hop values for 2015.

QNC should need no introduction but if you have been hiding under a rock for the last 25 years then they have released a bagful of singles on seminal labels such as Gee Street , D&D and Chopped Herring as well as the album “Dynamic Duo” on Grand Central and have been featured on releases by the likes of Aim and Rae & Christian. Not forgetting Curt Cazal's former group, the highly influential, JVC FORCE of 'Strong Island' fame.

Frameworks has released the downtempo 'Vanish' and 'Old Friend' EPs on First Word Records featuring vocalists such as Kathrin DeBoer from Belleruche and Island Records' JP Cooper as well a couple of albums from his 'Brickbuilders' project alongside BluRum 13 (One Self) on My First Moth. He is currently finishing his debut solo album release for First Word Records.

Renegades of Jazz (aka David Hanke aka Little Trooper aka one half of Mash & Munkee) has just released the single 'Fire' featuring Aspects and his second album 'Paradise Lost' on Agogo Records and has remixed the likes of Brownout, Chris Read, Skeewiff, Colman Brothers, Jungle Fire, Nick Pride & The Pimptones, Weekend Sun, Daytoner, Herma Puma and, well just about everyone!