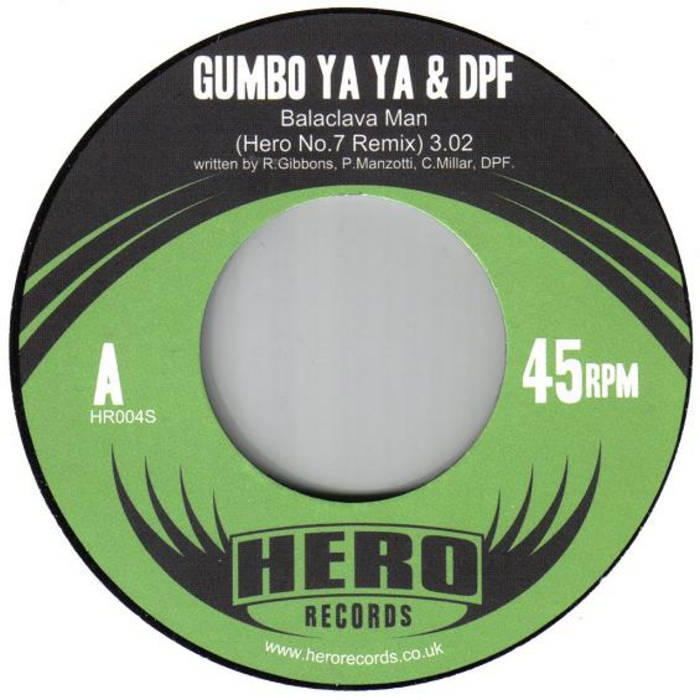 After 2 recent 7”s from Hero No.7 v Mash & Munkee and Savages & Unifairfly, Hero Records’ label bosses Hero No.7 return alongside Manchester-based producer Gumbo Ya Ya with a brand new 7” of hip hop breaks and psyche grooves.

The A-side features Hero No.7′s take on the track “Balaclava Man” from Gumbo Ya Ya’s “Life In The Making” EP originally released on Humble Monkey Records. For this version the Heroes strip away the original backing and replace it with a bouncy, percussion-filled b-boy break and a funky bass line, whilst retaining DPF’s incredible vocal skills. Another track for the b-boys and funky hip hop fans.

The flip features an incredible remix of “Black Mountain” originally from Hero No.7′s “Right Side Of The Tracks” EP (the original of which received support from the likes of Craig Charles’ Funk & Soul Show on BBC 6 Music) by Manchester-based DJ and producer Gumbo Ya Ya who has previously had his tracks released on Son Records, Area Six and Humble Monkey and also produced tracks for the Extremists from Skitz’ Titan Sounds crew. Gumbo’s remix adds harder drums, intricate scratching and extra instrumentation to turn it from the mellow downtempo flute-groove of the original into a head-banging psyche-infused hip hop track that is sure to be a future classic.

Two sides of funky hip hop which will still appeal to all funk, hip hop and breaks fans as well as all b-boys, b-girls and psyche lovers.

"Hero Records is back with a bang. So much music I can actually play in the club. They’re keepin the funk alive." Fly-T (Capitol 1212)
"Love particularely ‘Black Mountain Gumbo Style’. Very exciting beat for the dancefloor!" DJ Caroll (Dumoove Dugroove)
"DPF sounds great on this beat. Top stuff." Koaste (Heroic Recordings)
"'Balaclava Man' is straight up party hip hop, no holds barred. Play this in the middle of a crowded room, and there wont be any floor space left. 'Black Mountain Gumbo Style' has tasty beats and is fresh with content and production. Hurry up and get a scoop before its gone." Krash Slaughta (Pitchform Records / Rocstar Recordings / Filibusterz)