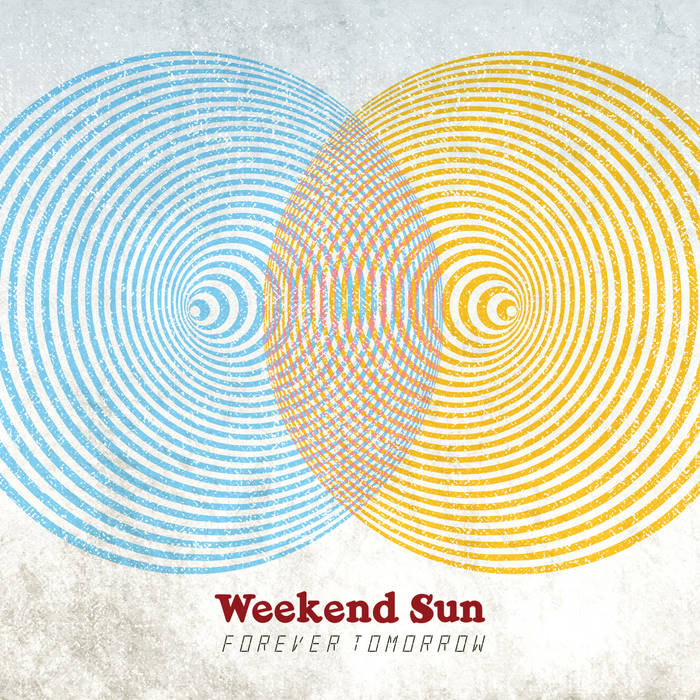 After the well-received limited 7” vinyl releases 'Figo' b/w 'Keep Running' and 'You're Good To Me' b/w 'Her Name Escapes Me' Weekend Sun are back with their debut album of soul, funk, jazz, hip hop and reggae-flavours entitled 'Forever Tomorow'.

Weekend Sun are Darlington-based musician Phil Smith and producer/dj Chris Tarn who met at the world-famous Sound It Out Records while both looking for records to sample - look out for a cameo from Chris djing in the excellent documentary 'Sound It Out – The Very Last Record Shop In Teesside'). Phil and Chris ended up swapping samples and, after discovering they shared similar tastes in 90s hip hop and black music from the 60s and 70s, started the band to create their own unique mix of their musical influences.

For their live shows, Weekend Sun mix samples and the DJ with the best musicians the Tyneside and Teesside has to offer. This is not some generic soul/jazz/funk band, the band have developed a unique style that does touch on soul & jazz but also includes cinematic sounds, a dose of disco and a dash of Mod. As the band has grown, Weekend Sun has relied less on sample-based music though some tunes start with an embryonic idea based around a sample which is later removed.

Soulful vocalists Beth Miller and Lindsay Hannon met Phil in a jazz club in Newcastle and he chanced upon Esther Taylor while in Greenwich Village, NYC. The funky pianist Alan Law, from the Alan Law Trio, bonded with Phil over a shared love of Blue Note jazz. Stevie Bongo who learned percussion in Los Angeles is now the most sought after percussion player in the north east of England. Darren Moore is also the drummer in Newcastle funk and jazz outfit King Bee and he and Phil have both played for the well-known singer/songwriter Elaine Palmer. The versatile guitarist Chris Davison also has his own band, The Kickshaws. Also featured on the album are a number of guest musicians, including the incredible flute-playing Dave Wilde from Smoove and Turrell's band.

Weekend Sun have supported DJ Craig Charles on a number of occasions and as well as receiving plays on his Funk & Soul Show on BBC 6 Music, support of Weekend Sun's previous vinyl releases has come from the likes of Wayne Hemingway, Dean Rudland (Blue Note Breaks) and Acid Jazz Records owner Eddie Piller who has played a number of tracks on his The Modcast show. The band have also had plays on BBC Newcastle, BBC Tees and BBC Scotland as well as Pete Isaac's Jelly Jazz and many radio shows across Europe. Listen out for forthcoming live broadcast on Nick Robert's More Than Soul show on BBC Newcastle.

The quality of the musicians means Weekend Sun are an in demand live act who have the ability to take the songs in different directions each time they play . Past bookings have included supporting Belleruche (Tru Thoughts Records), mod queen Fay Hallam (Blow Up Records), The Kelburn Garden Party (sharing the bill with the likes of Hypnotic Brass Ensemble, Red Snapper and The Nextmen), the Just So Festival, Matt n Phred's Jazz Club in Manchester and Newcastle’s infamous Hoochie Coochie Club.

The 'Forever Tomorrow' album launch is scheduled for the start of August at the band's initial meeting-place (and spiritual home!) Sound It Out Records and future gigs include slots at The Boiler Room, Newcastle on 6th September and supporting The Stone Foundation at The Forum, Darlington on 27th September.

'Forever Tomorrow' is a true melting pot of styles from the uptempo funk of 'Come With Me' and 'You're Good To Me' to the disco grooves of 'Feeling Inside', the hip hop beats of 'Not My Problem' to the dub flavours of 'Talk About It' ; the Motown stomp of 'Moody Old Man' to the downtempo acoustic sounds of 'St. Vincent Blues'. Perfect for people who like to get down and groove as well as those who like to lie down and listen 'Forever Tomorrow' is the stunning debut from Weekend Sun to be played at the weekend in the sun (as well as during the week in the rain!).

"this futuristic slice of northern soul should stir even the toughest of hearts, a cracking tune...looking forward to the album lads!" Emrys Baird (Blues and Soul)

“Nice dancefloor rocker. Would get the ladies dancing too” K-Delight (Playing Around)

“Fantastically fun and beautiful sounding records. This is what I want to listen to whilst I groove away with a pina colada in hand on some beach somewhere. Tip top.” Nick Thayer